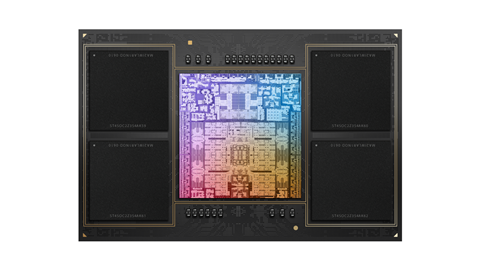 Apple has released two new systems-on-chips, the M2 Pro and M2 Max, which form the backbone of new MacBoook and mini computers.

The M2 Pro is made with a 5 nanometre process and has 40 billion transistors forming a 10 or 12 core central processor (CPU) and up to a 19 core graphics unit.

M2 Pro's CPU has up to eight high-performance cores, and four high-efficiency cores and with 200 gigabytes per second of unified memory bandwidth, Apple claims the multithreaded performance is up to 20 per cent faster than the M1 Pro with 10 cores.

For the GPU, Apple says it is up to 30 per cent faster than the built-in graphics in the earlier M1 Pro SoC.

For the M2 Max GPU, Apple added a larger level 2 cache and the unit can have up to 38 cores.

Apple said the M2 Max can have up to 96 gigabytes of memory; both new SoCs feature a 16 core Neural Engine with 15.8 trillion operations per second performance, up 40 per cent on their predecessors. Got a news tip for our journalists? Share it with us anonymously here.
© CRN New Zealand
Tags:
applearmdesktopslaptopsm2macbookminitech
By Juha Saarinen
Jan 18 2023
8:35AM