Aussie broadband struggles to keep up with New Zealand offerings 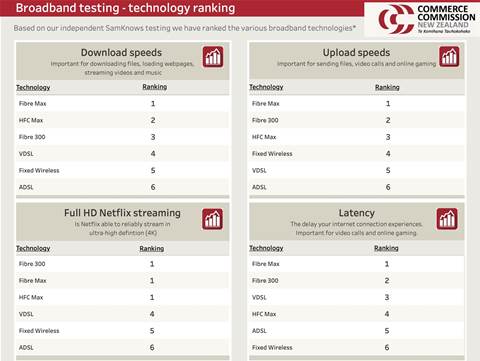 A joint quartely report produced by the New Zealand Commerce Commission and the Australian Competition and Consumer Commission shows that the fibre to the premises Ultrafast Broadband (UFB) networks stacks up well when compared to the National Broadband Network (NBN) across the Tasman.

The two regulatory watchdogs both use United States testing provider SamKnows to measure retail service performance through their respective Measuring Broadband programmes and have for the first time produced a joint report [pdf].

SamKnows supplies whitebox devices to volunteer internet users in Australia and New Zealand, which are used to measure the performance of their connections.

For the comparison three products were selected by the ComCom and ACCC.

For the 100//20 Mbps plans, SamKnows testing showed roughly the same performance on both sides of the Tasman, in line with the advertised speed during peak hours of 7 pm - 11 pm.

Service quality on NBN appears to be inferior to what UFB customers experience.

"The proportion of households having an average rate of packet loss above 1% is higher in Australia.

At this level of packet loss, some end-user applications will not run as intended," the report says.

When it comes to 4G fixed wireless, the situation is different, SamKnows testing suggests.

Australian consumers get faster downloads at 36.4 Mbps than their Kiwi counterparts who receive 29.4 Mbps downstream speeds.

The joint report also noted that the 4G FWA service has latency or packet delay in the 40-50 millisecond range, "which may impact end users using latency-sensitive applications" such as video conferencing.

Australian FWA services have slightly lower average latency than their New Zealand equivalents, where a considerably higher proportion have 60 ms or higher delay.

The SamKnows testing was done last summer, and the ACCC and ComCom report does not feature upgraded services options such as 5G FWA in Australia and New Zealand, or fibre wholesalers upping the minimum speeds for UFB.

“In the period since testing for this report was conducted, fibre wholesalers, including Chorus, have begun offering increased speeds of 300 Mbps on the 100 Mbps wholesale fibre connections at no extra cost to retailers, which means we now have even faster internet compared to Australia,” Telecommunications commisioner Tristan Gilbertson said.

Gilbertson's words were echoed by the chief executive of the New Zealand industry association, the Telecommunications Carriers Forum, Paul Brislen.

"In fact, the study has to leave out the new Hyperfibre plans in New Zealand (which offer up to 8 Gbps) because there simply aren’t any equivalent speeds in market in Australia," Brislen added.

Brislen also pointed out that the starter 300 Mbps plans are available to almost 87 per cent of the population, a coverage figure that Australia's NBN Co cannot match.

"In Australia, Telstra will sell you a similar service for A$180 permonth, but the upload speed is crippled to 40 Mbps," Brislen added.

A spokesperson for the ComCom said that while the Measuring Broadband NZ programme tests both 4G and 5G FWA connections, SamKnows does not yet have enough volunteers to produce robust results for the next-generation wireless broadband.

"We don’t currently test Hyperfibre, although customer numbers on these plans are still very low," the spokesperson said.

The Commerce Commission will re-procure its broadband measuring programme for the next three to five years to meets its obligations under the Telecommunications Act, the spokesperson said.

"It’s down to the capacity of their current testing equipment which can’t measure connections greater than 1 Gbps," Reade told CRN NZ.

Wholesare Chorus recently demonstrated 25 Gbps symmetric service over the UFB passive optical fibre network, and Reade said the industry has asked Measuring Broadband NZ to ensure it stays across with new technologies as they come to market.

Nevertheless, the report received a tick of approval from Vocus.

"t’s good to see robust and independent reports, and these speeds now have to be included in advertising and our websites, so it’s all very transparent," Reade said.

New Zealand recently introduced a marketing code which service providers must adhere to, and in Australia, the ACCC has kept a strict watch on broadband offerings.

Got a news tip for our journalists? Share it with us anonymously here.
© CRN New Zealand
Tags:
acccbroadbandbusinesscommerce commissionnbnregulatorysamknowsufb
By Juha Saarinen
Jun 1 2022
11:38AM