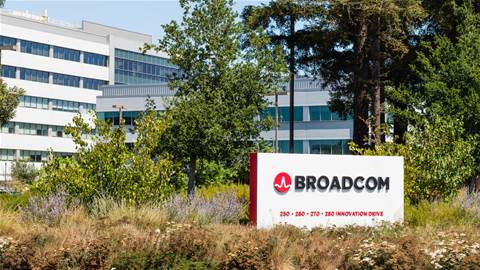 Semiconductor heavyweight Broadcom has agreed to purchase software virtualisation leader VMware in a US$61 billion (NZ$93.7 billion) deal that will vault the chip maker into contention with global technology stalwarts.

Combined, the companies have 55,000 employees and a market capitalisation of $267 billion.

“VMware has been reshaping the IT landscape for the past 24 years, helping our customers become digital businesses,” Raghuram said in a statement.

“We stand for innovation and unwavering support of our customers and their most important business operations, and now we are extending our commitment to exceptional service and innovation by becoming the new software platform for Broadcom.

The company has about 20,000 employees worldwide, with 63 per cent of them in research and development roles.

It sells a large array of semiconductor and infrastructure software offerings, competing for market share with AMD, Cisco Systems, Nvidia and Intel.

“Building upon our proven track record of successful mergers and acquisitions, this transaction combines our leading semiconductor and infrastructure software businesses with an iconic pioneer and innovator in enterprise software as we reimagine what we can deliver to customers as a leading infrastructure technology company,” Tan said.

“We look forward to VMware’s talented team joining Broadcom, further cultivating a shared culture of innovation and driving even greater value for our combined stakeholders, including both sets of shareholders,” Tan added.

The agreement was unanimously approved by the boards of directors of both companies.

VMware shareholders can opt to receive either US$142.50 in cash or 0.2520 shares of Broadcom common stock, in exchange for each VMware share they have.

Broadcom will acquire all of the outstanding shares of VMware in a cash-and-stock transaction that values VMware at approximately $61 billion.

This is based on the closing price of Broadcom common stock on May 25, 2022 US time.

In addition, Broadcom will assume US$8 billion of VMware net debt.

That makes VMware board Chairman and Dell Technologies chairman and chief executive Michael Dell one of the biggest beneficiaries of the deal, with a potential US$24 billion payday.

“Together with Broadcom, VMware will be even better positioned to deliver valuable, innovative solutions to even more of the world’s largest enterprises,” Dell said in a statment.

“This is a landmark moment for VMware and provides our shareholders and employees with the opportunity to participate in meaningful upside,” he added.

Dell has signed a letter supporting a merger with Broadcom as long as the VMware board of directors favours the deal.

Meanwhile, venture capital firm Silver Lake Partners is in line to get about US$6 billion if the US$61 billion purchase price holds.

It has about 35,000 employees around the globe.

The deal comes a little more than a year after VMware’s previous owner, Dell, said it would spin off the company.

It accomplished that move in October, taking the 81 per cent ownership stake it had and converting that into shares of VMware for Dell stockholders.

Channel expresses doubts about the deal

“I could have made 100 guesses of a company that I thought would have bought them, and I would not have come up with Broadcom,” said an executive at a large solution provider with significant VMware business who spoke on condition of anonymity for fear of jeopardising business relationships. “

"The whole thing is mind-boggling to me.

"I guess this is what happens when your valuation gets so deteriorated by market conditions that you become a rich target for people, whether you are a good natural fit or not,” the executive said.

Partners are watching the merger closely for hints of Broadcom’s long-term intentions.

“VMware is the centre of the world for many organisations’ technology stack,” said the chief information officer of a longtime VMware partner who asked not to be identified.

“Then there are all the vendors who are building to it and using it for reporting and management and control, and all the security tools and everything that has been designed around it.

The downstream impacts of them getting this wrong could be astronomical,” the CIO added.

VMware is the undisputed leader in software-defined infrastructure, with a 48 per cent market share that surpasses Nutanix, IBM, Huawei and Microsoft combined, according to the IDC Semiannual Software-Defined Infrastructure Tracker from June 2021.

The two products are installed by more than 400,000 customers, including all of the Fortune 500, and governments around the world.

Some channel partners are wondering about Broadcom’s reasons for acquiring VMware.

“If Cisco would have acquired them, it would have made sense,” the CIO continued.

“Dell, when they owned them, we loved that. At least it was channel-driven.

"This is fraught with risk.

"When a company is a channel-led organisation, all the way down from the top, the executives are making business decisions that account for the channel.

"I just don’t see Broadcom showing up as channel-leading company.

"They do a lot of that directly," the CIO said.

Broadcom has a massive catalog of semiconductor products that it has deployed across enterprises in all verticals and at all levels of government.

Analysts have speculated that Broadcom is building its software capabilities for a more cloud-centric future with the VMware buy, while also hedging against the chip shortages that have hit the semiconductor industry.

Two solution providers with direct experience dealing with a product before and after a Broadcom acquisition gave middling reviews of the company’s integration abilities.

Broadcom itself was bought by Avago Communications in 2015.

The next year the newly combined company had changed its name to Broadcom and then bought Brocade Communications for US$5.5 billion.

It next tried to move on Qualcomm in late 2017 with a failed US$103 billion bid.

The next year, Broadcom successfully purchased CA for $10 billion.

A chief information officer of a longtime VMware partner on the West Coast said that the trust he had in Broadcom was shaken.

“When we bought Nimsoft [solutions] it was a big investment.

"It was a big change internally,” the partner said.

“When Broadcom bought CA and Nimsoft we thought, ‘oh, Broadcom is known for building good products,’ but then they immediately said, ‘we have no idea why we bought this."

The CIO said Broadcom would not do anything with NImsoft.

He said the company was forced to move off Nimsoft, at a heavy cost in time and money.

Meanwhile, another VMware partner said he was a Symantec partner when Broadcom purchased the cybersecurity company for US$10.7 billion in 2019.

“Symantec was always kind of a faceless corporation so when Broadcom bought them, we didn’t notice any change,” he said.

“It didn’t get worse, but they didn’t make it any better either,” he added.

Partners said they want to hear Broadcom say it is going to invest in VMware and not use it as a safety net in the event the supply chain difficulties in the semiconductor industry worsen.

It takes time and a strategy that everyone is comfortable with,” he said.

VMware is the most valuable product in Broadcom’s lineup, one partner said, with the most ability to help or hurt the company, depending on how it is managed.

“It’s not just another piece of software.

"It’s not just another product.

VMware has, since its beginning, been the central part of an environment and it’s too damn important to get trashed,” one wary partner said.

“They should treat this like it is one of their most important products,” the partner added.

Another partner said that it is possible that Broadcom could buy VMware with the intent to make it more channel-friendly.

“If you take a glass-half-full approach,” another VMware partner said, “if they buy VMware and they buy into the partnering arrangements they have today and the direction they were going to improve the partner relationships around the life cycle, they could bring other technologies into the fold and bolster their partnering.

If Broadcom’s leadership said, ‘we’re going to build a partner program and we are going to leverage VMware’s partnership, grow it, then fold other products under it,’ that would be a real win.”

Got a news tip for our journalists? Share it with us anonymously here.
Copyright © 2018 The Channel Company, LLC. All rights reserved.
Tags:
broadcombusinesscaqualcommsemiconductorssymantecvirtualisationvmware
By O’Ryan Johnson
Staff Writers
May 27 2022
2:50PM