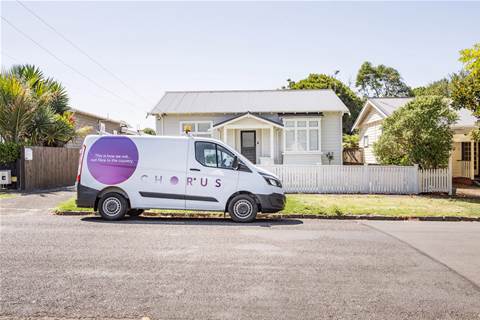 Kiwi telco infrastructure provider Chorus has posted NZ$42 million in profit after tax for the half-year ending December 2021 as its fibre connections hit a total of 918,000, an increase of 47,000.

The company’s operating revenue over the half-year was up to $483 million, a slight increase from $478 million in the same period the previous year, with EBITDA hitting $347 million, up from $328 million.

The national rollout of fibre is “close to completion with just 30,000 premises left to pass”, Chorus CEO JB Rousselot said.

Of those who currently have fibre available to them, uptake is continuing to grow slowly, increasing from 65 percent to 67 percent between June and December 2021.

"The continued growth in fibre demand is a testament to the reliability fibre broadband is delivering through the challenges of the ongoing COVID pandemic,” Rousselot added. “We saw the lockdowns and other public restrictions in the first-half ramp up the average data usage on fibre to new record highs of more than 600 gigabytes per month.

Chorus’ recent fibre boost campaign saw 600,000 customers gaining improved their connection speeds and 23 percent of fibre connections are now on gigabit plans, according to a statement from the company.

“Our big fibre boost was the largest-ever performance upgrade for fibre customers. Working closely with broadband retailers, residential customers on a 100 Mbps fibre plan can now access 300 Mbps, while the upload speed increased five-fold from 20 Mbps to 100 Mbps”, Rousselot said. “This upgrade builds on our purpose to ensure that New Zealanders have access to the best of internet connectivity.”

The company has raised its FY22 EBITDA guidance from $665 million to $685 million, and its dividend guidance from 26 cents to 35 cents.

Chorus is also commencing a $150 million share buyback scheme as it has seen its financial position improve and had its credit rating thresholds lifted as a “tax-efficient allocation of surplus capital that will help boost future earnings per share and imputation credit reserves,” according to a statement from the company.

Got a news tip for our journalists? Share it with us anonymously here.
© CRN New Zealand
Tags:
broadbandbusinesschorusfibreinfrastructuretelco
By Ben Moore
Feb 22 2022
3:10PM