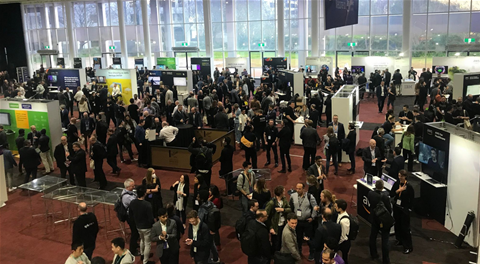 AWS said cloud has absorbed much of managed service providers' market and recommended partners to compete by harnessing cloud-enabled offerings, according to its research.

“Traditional IT managed services suppliers are seeing fewer, and potentially lower value, opportunities coming to the market as cloud solutions take their place,” according to an AWS-commissioned report by Intermedium released at AWS's 2022 Public Sector Cloud Summit hosted in Canberra.

The report is likely to have bearing on both sides of the Tasman.

While the compound annual growth rate of Australian cloud contracting has grown by 44.3 per cent since 2016-17, the value of "traditional" non-cloud IT managed services contracts has fallen.

“Since 2018-19 the annualised contract value of the federal traditional IT managed services market has decreased from A$1.8 billion to A$1.4 billion per annum, approximately a 20 per cent decrease in just four years,” the report read.

“In NSW, the results are even more dramatic. Traditional IT managed services have dropped from a total spend of A$300 million to A$150 million, a reduction of 50 per cent in five years.”

Cross-departmental platforms have increasingly absorbed these services and often through whole-of-government (WofG) contracts, the report found.

“These agencies are increasingly responsible for creating platforms to do the work that multiple systems that other, and often smaller, agencies previously owned and managed independently.”

“For example, the NSW Department of Customer Service is responsible for the management of several WofG platforms such as e-invoicing, licensing and proof of identity.”

“Other major jurisdictions show a discernible trend towards NextGen services at the expense of traditional IT managed services.”

The report said that nearly every jurisdiction across Australia and New Zealand has a strong position on cloud adoption; agencies in New Zealand must must adopt public cloud first, with case-by-case risk assessments required for exemption from the policy, the report said, citing recent government direction.

“Victoria’s 2021-22 figure shows 19 per cent of its managed services contracting value can be attributed to cloud-based approaches, placing it at roughly the same level as NSW’s 21% in 2018-19.” 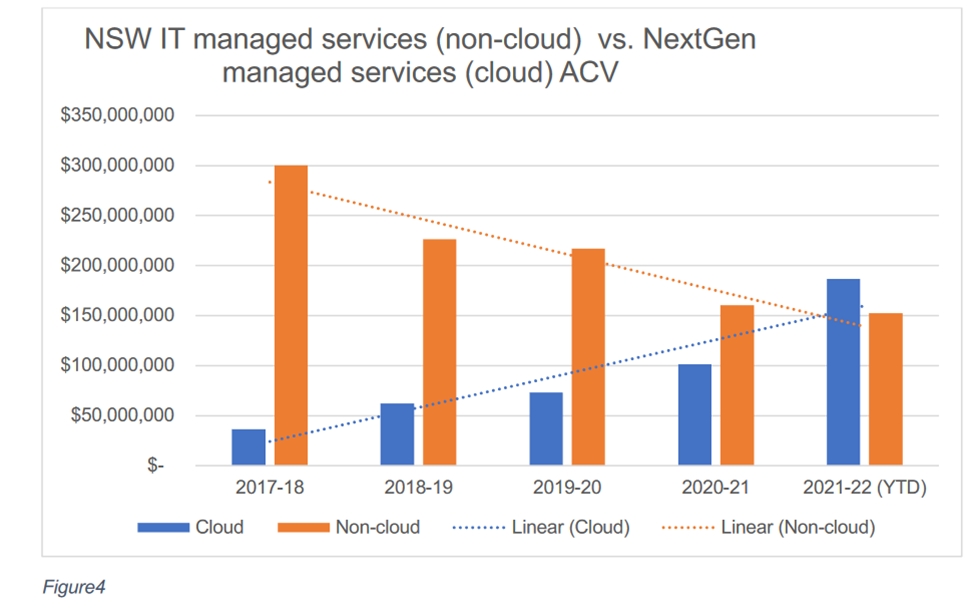 The report said the public sector’s shift to the cloud had been accelerating since 2012 when the federal government’s National Cloud Computing Strategy compelled agencies to include cloud options in their shortlist for new IT procurements. And reached a “tipping point” in 2019 “when hyperscalers such as AWS received certification from the Australian Signals Directorate (ASD).”

The report said traditional ICT services contracts with government agencies had only made it this far because public servants were afraid of the “‘transition in’ and ‘transition out’ overheads” of moving to cloud.

“Historically, such extensions [on traditional ICT services contracts] have been exercised, rather than investing in a full-scale evaluation of a transition to cloud.”

“In theory, any of them could be challenged by a potential cloud transition brought on by urgently changing circumstances, such as the increasing cost of government debt driving agencies to identify cost savings wherever possible.”

The report said MSPs could survive the transition by “partnering with cloud infrastructure providers to unlock new, innovative ways for services to be delivered and managed.”

CRN spoke to AWS partners about cloud-enabled services offerings they were providing public sector clients to ensure they harnessed the transition to cloud instead of being made obsolete by it.

AC3, CyberCX and NEC told CRN that advancements in the cloud, such as serverless technologies, were enabling them to offer clients consumption-based pricing models and cloud-enabled systems integration had created data-centric solutions like enhanced machine learning.

Datacom told CRN that its A$1.4 million cloud migration contract with the Victorian Department of Environment, Land, Water and Planning (DELWP) exemplified how the company had harnessed the public sector’s shift to the cloud.

“Our project with DELWP saw us help them accelerate their digital transformation and achieve a greater than 60 per cent reduction in costs to operate services as a result of the migration to AWS,” Datacom director of strategy and solutions Mark Hile said.

Got a news tip for our journalists? Share it with us anonymously here.
Copyright © CRN Australia. All rights reserved.
Tags:
ac3amazon web servicesawsbusinesscybercxdatacommspsnecpublic sector
By Jeremy Nadel
Sep 2 2022
11:49AM