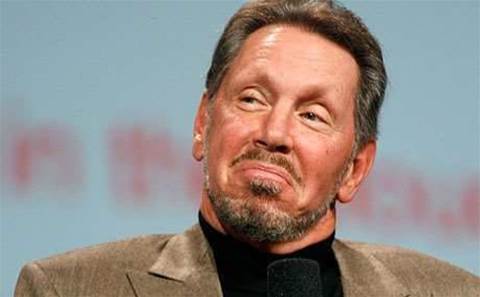 Oracle co-founder and chief technology officer Larry Ellison used his company’s latest quarterly earnings call to show how his company continues to build interoperable services with his rivals in cloud computing, and kept up his usual criticisms of the top vendor in the space, Amazon Web Services.

Although the Austin, Texas-based company has responded to customer demands for multi-cloud environments with offerings such as Oracle Database Service for Microsoft Azure and MySQL HeatWave on AWS, Ellison told listeners to the earnings call Monday that his offerings still beat AWS when it comes to price and performance – so much so that some of AWS’ “most famous brands” plan to move to Oracle Cloud Infrastructure (OCI).

“I personally have been talking to some of Amazon’s most famous brands that are running AWS,” he said. “

And the AWS bill is getting very large. And they can save a huge amount of money by moving to OCI".

And we expect next quarter we’ll be announcing some brands and companies moving off of Amazon to OCI that will shock you.”

He continued: “The amount of money these huge companies, these very famous companies, spend with Amazon is kind of staggering.

"I mean, everyone assumes, ‘Hey, I move to the cloud, and I save a lot of money.’

"Depends which cloud you move to."

"And Oracle is much less expensive than the competition. … We’re talking to the most famous brands that are running Amazon and some of them are going to be moving very soon.”

The enterprise IT giant added about 1,000 new paying customers for its infrastructure business during the quarter, he said.

Oracle chief executive Safra Catz said on Monday’s call that Oracle has “cloud regions in more countries and cities than AWS and Azure, giving our customers more choices for their sovereign data.”

Still, the embrace of multi-cloud – with customers mixing and matching applications and infrastructure from various cloud vendors – remains an opportunity for Oracle, Ellison said.

“Our job is to give our customers the ability to choose application infrastructure technology from multiple clouds and then have those different clouds coexist and interoperate gracefully,” Ellison said on the call.

"Growing over 50 per cent in US dollars, and almost 60 percent in constant dollars. We expect Oracle’s total cloud business to exceed a $20 billion annual run rate next year.”

When asked about investment made in go-to-market, Catz said that Oracle has invested in more engineers in the field to help customers bring over workloads.

“And once we’ve shown them how to do it, and the enormous benefit they get by doing it, this is the ultimate sales accelerator,” Catz said.

“Because there’s nothing like the customer who realizes that our solution is just so much better and so much less expensive for them."

"And you have to do that often by, let‘s say, priming the pump by sending engineers, field engineers, who can help the customers move those workloads."

"And that’s really propelled what‘s been going on in our OCI cloud.”

“But all of that has changed. We have these phenomenal low code tools” such as Oracle’s Apex platform.

Cloud services and license support revenues were US$8.4 billion for the quarter, up 14 per cent year over year.

Catz said that Fusion Autonomous Database and OCI drove revenue in this category.

Cloud license and on-premises license revenues came in at about US$1 billion in revenue, up 11 per cent year over year, according to the company.

Cloud revenue was US$3.6 billion, up 45 per cent year over year.

Most of the money came from applications, with revenue of US$2.7 billion, up 43 per cent year over year.

Cloud infrastructure revenue was about US$1 billion, up 52 per cent year over year, according to Oracle.

Infrastructure cloud services had an annualized revenue of US$3.2 billion, according to Oracle.

Cloud-at-customer consumption revenue was up 92 per cent. And Autonomous Database was up 56 per cent.

“It’s not only that our growth rates are higher than our hyperscale competitors,” Catz said.

“Maybe you’d expect that because we‘re the newest and thus the smallest."

"But our growth rates are increasing as we get bigger."

"And so we‘ve been able to architect it more performantly, more securely and more sustainably."

"As a result, as more companies test our cloud, they discover how much better it is on price, security, performance and sustainability.”

Strategic back office cloud applications had an annualized revenue of US$5.8 billion and grew 33 per cent.

Fueling the growth was Fusion ERP Cloud, up 33 per cent year over year; NetSuite ERP Cloud revenue up 27 per cent; and Fusion HCM, up 26 per cent.

Oracle took a hit in operating income, down 23 per cent year over year at US$2.6 billion. The company cited the strength of the US dollar as a major headwind to revenue. Tough exchange rates were also cited by rivals Salesforce and Microsoft during their recent quarterly earnings.

The company also took a hit from cutting ties with Russia over the country’s invasion of Ukraine, Catz said.

“This negatively affected revenue by over one point of growth,” she said.

“Had we not left, actually, our growth rate would be over 9 per cent.”

Next quarter, Oracle expects total revenue to grow 15 per cent to 17 per cent.

Total cloud growth should grow 42 per cent to 46 per cent.

Cloud growth excluding Cerner should be above 30 per cent, Catz said.

Got a news tip for our journalists? Share it with us anonymously here.
Copyright © 2018 The Channel Company, LLC. All rights reserved.
Tags:
amazonawsbusinesscloudlarry ellisonoracle
By Wade Tyler Millward
Sep 13 2022
1:32PM