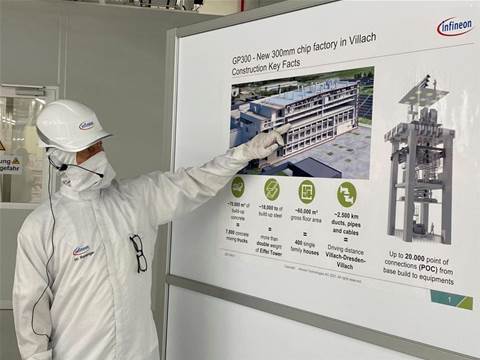 Infineon is ready to spend several billion euros on the right takeover target as it searches for acquisitions to boost growth, the company's chief executive Jochen Hanebeck said.

The German chip maker is constantly "on the lookout" for suitable companies, Hanebeck told Frankfurter Allgemeine Zeitung (FAZ). "I see it in the range of up to a few billion (euros)."

The plans come at a time when demand for chips used in everything from smartphones to cars soars and supply chain bottlenecks lasting almost two years have plagued global industries from autos to healthcare and telecoms.

Infineon, which reported a 63 per cent jump in segment profit to 3.4 billion euros (US$3.6 billion) in the fiscal year that ended September 30, has said it sees growth in particular in electromobility, autonomous driving, renewable energy, data centres, and the internet of things.

Hanebeck would not comment on individual takeover candidates, according to the newspaper.

He said the company could expand its portfolio in several fields, including power semiconductors, sensors, software and artificial intelligence.

It was quite conceivable that start-ups that are not sufficiently well financed, for example, would want to join a corporation, Hanebeck told FAZ.

Infineon bought US rivals Cypress Semiconductor for US$10 billion and International Rectifier for US$3 billion in 2019 and 2014, respectively, to expand in next-generation automobiles and Internet technologies.

To boost production capacity in Europe in a fiercely contested market, Brussels in February launched the so-called Chips Act, enabling 15 billion euros in additional public and private investment in the industry by 2030.

Infineon said last month it was planning a new €5 billion factory in the eastern German city of Dresden.

Taiwan's TSMC is also in advanced talks about setting up its first European plant in Dresden, according to a media report.

Intel, on the other hand, has backed away from its original target of opening a chip factory in eastern Germany in the first half of 2023, according to another media report.