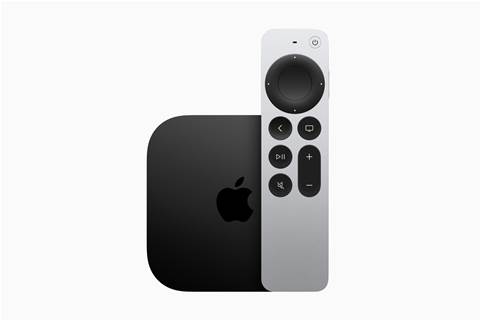 Apple TV 4K costs $279 for a Wi-Fi-only model with 64 GB storage, and $319 including GST for the 128 GB variant that also has a gigabit Ethernet port for wired connections, with availability from November 4.

Both support Wi-Fi 6 802.11ax with 2 by 2 multiple input and output antennae configuration, HDMI 2.1 video output, and come with the Siri Remote that connects over Bluetooth 5.0 and charges with USB-C.

Several video formats are supported, including SDR with AVC/HEVC with the Main/Main 10 profile, at resolutions up to 2160p and 60 frames pers second.

The new Apple TV 4K is backed by streaming services including the over 100 million song library Apple Music, and Apple TV+.

Games are available through Apple Arcade, and the company's Fitness+ with workout content and mediations is also available.

The Apple TV 4K can act as a Smart Home Hub, allowing users to manage HomeKit cameras, lights, shades and other devices, and supports the new Matter industry-wide connectivity standard for third-party accessories.

Apple said the TV 4K is more environmentally friendly than earlier models, with the A15 Bionic being more energy-efficient, recycled gold being used for plating the printed circuit boards, and fibre-based packaging.

No mercury, BFRs, PVC and beryllium are used to make the Apple TV 4K.

Got a news tip for our journalists? Share it with us anonymously here.
© CRN New Zealand
Tags:
4ka15 bionicapple tventertainmenthdr10siri remotetech
By Juha Saarinen
Oct 19 2022
7:48AM