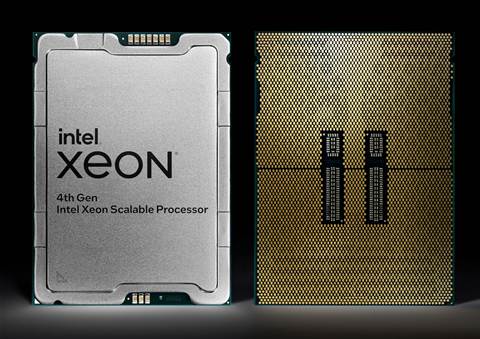 Intel’s new fourth-generation Xeon processer has set off a gold rush with no fewer than a dozen server vendors unveiling new devices that put the scalable chip at the heart of their next-generation builds.

Dell Technologies, Hewlett Packard Enterprise and Lenovo each have said they all have server lines that incorporate the chip in major launches.

Even smaller players such as Atos, Tyan and Lanner Electronics have unveiled products built with the chip inside.

Their enthusiasm is two-fold.

First, Intel’s new chip is driving leaps forward in the use of computing power in the data centre. Micron Technology said the chip will eliminate bandwidth bottlenecks for “years to come”

Meanwhile, Supermicro is billing its new servers as a way for customers to reach environmental goals, adding that Intel’s built-in accelerators can result in more efficient use of computing power.

Atos unveiled three server units that will rely on Intel’s new chip in its latest generation of BullSequana edge servers.

The devices are designed for deploying applications with large computing demands at the edge such as AI and virtual reality gaming, it said.

Atos also has a new line of x86 servers—BullSequana SH—that each have two fourth-generation Intel Xeon Scalable processors built in. Atos said given its security, scalability and reliability capabilities, BullSequana SH can meet the demands of enterprises, cloud providers and hyperscalers.

Cisco’s newest UCS M7 servers that incorporate Intel’s new chip have a 4-to-1 consolidation ratio compared with the company’s previous generations of UCS servers, reducing the number of systems required and giving users the ability to do more with less, the company said.

The new C-Series and X-Series servers give users more performance and scalability.

It enables customers to support a wider range of compute-intensive workloads, Cisco said.

Those capabilities will be needed to handle the incredible amount of data that needs to be stored and secured across all of those environments, he said.

The company is expected to release more information on the new PowerEdge servers soon.

The new machines will push the boundaries of computing performance, enabling AI at scale and fueling innovation, he said.

The NCA-6530 is a 2U rackmount network security appliance, while the HMB-6130 is a compute blade for the Lanner HTCA-series.

Each unit has up to two times the PCIe bandwidth from PCIe 5.0 and 150 per cent greater memory capacity from DDR5.

Micron showed off its DDR5 server memory portfolio for the data centre, which has been fully validated on the fourth-generation Intel Xeon Scalable processors, the company said.

With Intel’s innovation, Micron said its DDR5 memory delivers up to twice the memory bandwidth over its previous generations, which is critical to sustaining the growth of cores in modern data centre processors.

The company hailed the innovation as relieving a potential bandwidth bottleneck for its customers.

“Transitioning to DDR5 will help alleviate a potential bottleneck for years to come by providing higher bandwidth to unlock more compute power per processor,” the company said.

“Micron DDR5, in combination with 4th Gen Intel Xeon Scalable processors, benefits a wide range of workloads including SPECjbb, which delivers up to 49 per cent performance improvement on benchmarking for Critical-jOPS [Java operations per second] compared to previous generations.”

Micron said its DDR5 memory should give customers more consistency and reliability in every part of the data centre thanks to on-die Error Correction Code and bounded faults.

Accelerated computing is one way to reduce the energy footprint of data centre and large computing applications, he said.

“Cloud and AI are revolutionising how companies work and how their products work.

"Data centres already use 4 per cent of the world’s electricity, up from 1 per cent five years ago.

“One Nvidia accelerated server can reduce the processing time and energy and cost by x factors.”

Supermicro is incorporating the processors into more than 20 new products in its X13 line of servers.

Supermicro is billing its servers as a way customers can “achieve their sustainability goals” adding that Intel’s built-in accelerators can result in more efficient use of computing power.

Tyan in collaboration with MiTac Computing Technology is incorporating the chip in several of its new servers on the Thunder-line for AI, analytics, cloud storage and high-performance computing.

A 4U pedestal Thunder HX FT65T-B5652 server is built for smaller high-performance computing workloads that need large computing power at the deskside.

The Thunder HX TS75-B7132 and Thunder HX TS75A-B7132 are dual-socket 2U servers designed for high-performance in-memory computing and virtualization applications.

Meanwhile, the Thunder CX GC79A-B7132 is made for workloads that need high volumes of CPU cores and memory, such as virtualisation and in-memory database applications.

Got a news tip for our journalists? Share it with us anonymously here.
Copyright © 2018 The Channel Company, LLC. All rights reserved.
Tags:
businessciscodellhpeinspurintellenovomicronnvidiasupermicrotyan
By O’Ryan Johnson
Jan 16 2023
7:59AM