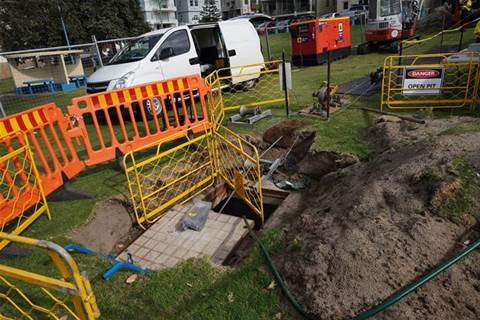 Southern Cross Cable Ltd has officially taken the wraps off its new NEXT trans-Pacific link, with the system being operational and taking customer pre-orders since July 1.

With a projected lifespan of twenty years, construction of the NEXT cable began in 2019, with the final splice being done in April this year.

NEXT is first of a new set of cables for Southern Cross, to replace existing systems when they retire in 2030, chief executive Laurie Miller said.

The cable system, estimated to have cost US$300 million, was laid by Alcatel Submarine Networks with subsea engineering firm Pioneer Consulting providing the design.

Spanning 15,840 kilometres across the Pacific Ocean, NEXT runs from the Clovelly cable landing station in Sydney to Los Angeles.

NEXT branching units connect New Zealand, the Fijian islands of Suva and Savusavu, Kiribati and Tokelau, providing the latter two with their first fibre connection to the world.

A Spark spokesperson told CRN NZ that retail service providers or RSPs that use the Southern Cross cables have already been experiencing the lowest latency routes from Auckland to Sydney, and to Los Angeles.

"The new Southern Cross NEXT route further reduces the latency between Auckland to Los Angeles by about 5 per cent.

"While it may not seem like much, it tends to be very important for users with time sensitive requirements such as financial traders, and gamers.

"It also allows RSPs to provide more resiliency and diversity options to those customers that have requirements in which uptime is paramount, like banking," the spokesperson added.

Southern Cross Cable Ltd which owns NEXT and its other subsea circuits has four shareholders.

These include Spark with 40.7 per cent of the shares, Singtel with 32.59 per cent holding, Telstra at 25 per cent and Verizon which has 1.67 per cent of SCCL.

Spark declined to reveal which individual providers have signed up for indefeasible rights of use on NEXT, but the spokesperson said the majority of Southern Cross resellers have taken capacity on the new cable to meet growing demand.

NEXT will face competition in the region from BW Digital owned Hawaiki Submarine, which plans to have its second cable, Nui, operational by 2025.

Got a news tip for our journalists? Share it with us anonymously here.
© CRN New Zealand
Tags:
australiacienahawaikiinternetnetworkingnew zealandnextsccsservice providerssouthern cross cable system
By Juha Saarinen
Jul 7 2022
10:13AM