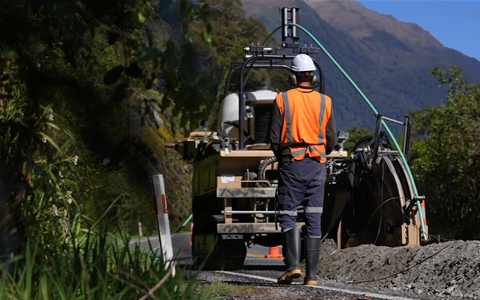 Chorus and the Rural Connectivity Group (RCG), a joint venture between Vodafone, Spark and 2degrees, today announced that the last part of a government-funded network upgrade for the remote West Coast region of the South Island is complete.

RCG has added 16 new mobile cellular sites to the existing 26 already operational on the West Coast, providing 4G service to homes and 130 kilometres of state highways, as well as 14 tourist locations.

The cell sites were built in collaboration with Chorus and its Ventia and Electronet subcontractors, which laid 250 kilometres of fibre-optic cabling between Fox Glacier and Haast, and onwards to Lake Hawea.

Increasing telecommunications resilience for the region, which is a popular tourist destination, was one of the goals of the project.

Until now, West Coast connectivity relied on two fibre optic cables running via State Highway 6 from Nelson, and a second cable across Arthur's Pass from Christchurch to Greymouth.

The lack of route diversity left the West Coast region vulnerable to becoming cut off during adverse weather events such as the recent heavy rainfalls that caused slips and flooding.

"The new diversity in Chorus' network will provide additional peace of mind against future network damaging weather events on the West Coast.

We are incredibly proud to have this vital piece of infrastructure completed for the West Coast,” Chorus general manager of customer and network operations said.

According to Paul Brislen, chief executive of industry association the Telecommunications Carriers Forum, "The New Zealand telco sector is constantly working with partners to improve coverage and this is a tremendous example of industry and government coming together to deliver a great outcome for consumers," Brislen said.

On top of improved 4G mobile coverage, residents in Haast can now order fibre to the home broadband service from retail providers.

Funding for the project was provided by the Crown Infrastructure Partners government agency, which manages the nationwide Ultrafast Broadband (UFB) fibre to the premises programme.

Got a news tip for our journalists? Share it with us anonymously here.
© CRN New Zealand
Tags:
2degreeschoruscipfttpisprcgservice providerssparktelcoufbvodafonewest coast
By Juha Saarinen
May 2 2022
10:43AM